I’ve spent most of this week diligently making things (in-between job hunting) and now have a lot of marmalade, one and a half pairs of fingerless mitts, and some arrangements to my credit. There will be a post about the mitts in due course, the marmalade is flavoured with a dash of chocolate bitters and has come out splendidly. The arrangements included an opticians appointment.

I now have my first pair of glasses, specifically for reading. They’re a bit disconcerting but I’m getting used to them and think they’re helping (it doesn’t feel natural to wear glasses yet, and I don’t like the way things are out of focus beyond about 50cm whilst I’m wearing them, but I do like how much less tiring reading suddenly seems). 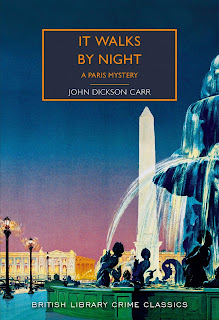 ‘It Walks By Night’ is the first mystery novel that John Dickson Carr wrote, which now that I’ve read four of them I think you can tell. It has all the things I’m beginning to recognise as the hallmarks of his style but it doesn’t flow as well, or have the humour of the other books I’ve read.

It does have a distinctly gothic atmosphere, a hint of a ghost story about it, and a locked door/impossible crime element. (The door isn’t locked, but it’s watched - that really isn’t a spoiler). What I like so much John Dickson Carr is that gothic element and the way becomes to have fun with it.

In this instance the humour is mostly confined to the title - ‘It Walks by Night’ is definitely used to suggest something of an inhuman nature. Then throw into the mix a lunatic and murderous ex husband who has been to a plastic surgeon, a beheading, a shady night club, and lots of illicit drug taking. It isn’t quite as over the top as it might sound from all of that.

The drug taking sounds a bit unlikely, and some of Inspector Bencolin’s forensic deductions would stretch credulity on an episode of CSI, but over all it hangs together. I think this is both because despite the melodrama a couple of key characters behaviour is surprisingly convincing, and for that generally gothic atmosphere.

There are specific references to vampires and werewolves as well as things that go bump in the night. I wonder if we’re also meant to think of Doctor Jekyll and Mr Hyde. Gaston Leroux is name checked so it’s impossible not to think of The Phantom of the Opera. It’s excellent window dressing for what might not otherwise be a particularly memorable story, definitely adding that extra something.
Desperate Reader at 9:15 PM
Share