I've had a couple of holiday days this week, and had planned to read a lot and catch up with a few posts. I've done neither, spending a lot of time waiting for workman to turn up and do their thing instead (fire alarm guys, when you say you'll be on sight from 9am but don't turn up until 11.43 and then complain about parking you're not making any friends). At least I've had time to listen to lots of podcasts. Mostly that's been Emma Smiths undergraduate lectures on Shakespeare and his contemporaries. That's nothing like as worhy as it sounds, find them Here.

On Saturday, as well as seeing The Provoked Wife at the RSC (still excited by how good that was, it's absolutely worth making the effort to see) we went to Coughton Court. It's the home of the Throckmorton family, managed by the National Trust and has a collection of stunningly pedestrian portraits. Architecturally it's more or less a mix of Tudor and gothic revival, and as romantic as you could hope for. 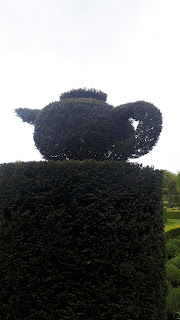 The portraits are interesting precisely because so many of them are not old masters. It's no bad thing to realise how much very ordinary art covered the walls of the rich and powerful. It's also interesting because it's very much a National Trust house, set up for people to look around and to take the relative beating of all those welly booted feet crossing the carpets. The rooms the public see are stage sets for whatever story the Trust wishes to tell on a given year - which is a great thing in its way, because you can collapse into chairs and enjoy the setting. On the other hand those carefully set rooms with a minimum of things that can be damaged feel a bit dead to me.

On Sunday we went to Deene Park in Northamptonshire - it's part of the Historic Houses association, completely family owned, and open to the public between 2-5 on Sunday afternoons between April and September. Deene Park has a long history (interesting architectural links with nearby Kirby Hall) a lot of very good art, and is very much a living house. It came out of the Second World War in a pretty poor state but the parents of the current owner set about rescuing it, and he and his wife are carrying that project on.

It's definitely worth a look if you're ever in the area when it's open. There was a particularly well preserved tapestry in one room, gardens with teapot topiary which are charming, guides who are more than ready to give their honest opinion about what a shit the 7th Earl of Cardigan was (the charge of the light brigade one, and possibly the best known previous owner). It's also really beautiful inside and out.

I've had some luck in Leicester's charity bookshops. I found a Maria Edgeworth I hadn't heard of - 'Ormond' - which sounds like fun, and 'Female Playwrights of the Restoration' five comedies. Whoever had it before has made copious notes on Susanna Centlivre's 'The Basset Table' and nothing else which I find very intriguing. As a good deed I took a Scottish five pound note as change for these, the oxfam volunteer was unconvinced that it was legal tender, and visibly surprised (also totally unconvinced) when I promised her she wasn't ripping me off because it was actually worth £5 and that there's no sort of exchange rate.

Not in a charity shop I finally bought Angela Clutton's 'The Vinegar Cupboard' which I'm very much looking forward to reading properly, and the new River Cottage handbook on Outdoor Cooking. Living in a city centre flat and not driving creates very few opportunities for outdoor cooking, but a person can dream, and at least I'll know where to turn if I ever find I need to spit roast something.

Finally, just in time to cheer me up prior to tomorrow's return to work, the latest edition of Elementum arrived today. I'll write about this properly when I've read it, but honestly, it's glorious. The theme is Hearth which ties it quite nicely to Outdoor Cooking.
Desperate Reader at 7:32 PM
Share