The Fanastic Follies of Mrs Rich at the RSC

'The Fantastic Follies of Mrs Rich or The Beau Defeated' was definitely the highlight of our 3 March visits to Stratford upon Avon, and not just because it was comedy rather than tragedy.

I'd never heard of the playwright, Mary Pix or her female contemporaries Delarivier Manley, and Catherine Trotter, or even Susanna Centlivre who followed just a little later (and only know their names now because they're mentioned in the programme) but I really enjoyed Aphra Behn's 'The Rover' last year, and adored Congreve's 'Love for Love' (Congreve is another contemporary of Pix, Behn maybe a generation older) when we saw it at The Swan, so it was an easy sell. 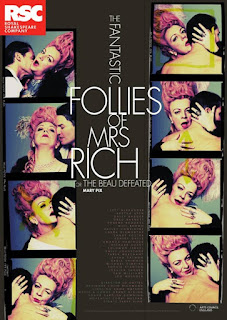 We were always more enthusiastic about seeing this play than either Macbeth, or the Duchess of Malfi, on my part because I feel a definite ambivalence towards Shakespeare generally (he rarely seems to come alive for me), and the way Maria Aberg (who directed The Duchess of Malfi) presents her plays specifically. There was a definite excitement about seeing something written by a women at the turn of the 18th century, and always the hope it would be properly funny.

It was; from the opening which utilises harpsichord and saxophones, through the sumptuous costumes, a cast who were uniformly excellent, and the play itself there was nothing we didn't like. The saxophones particularly are a joke that works managing to sound more or less like a string quartet until they're allowed to break out. It's silly, and fun, and feels right. The character of Mrs Rich sings a lot in this production too, which is another innovation on the original. That didn't work quite so well at the preview performance we saw, sometimes it was hard to hear Sophie Stanton over the accompanying music, but hopefully that's something that will be fixed.

Meanwhile the plot is basically about a very wealthy widow (Mrs Rich) trying to buy her way into a title and society - because what's money for if it can't get you in to the places you wish to be? Pix is clearly questioning if either are worth the price being asked, but for women in the 18th century there weren't many other avenues of power or influence open to them, so Mrs Rich's obsession with rank is understandable if not admirable.

What I principally enjoyed about this (apart from the performances, particularly Sophie Stanton as Mrs Rich) was the way it puts women, and lots of them, front and centre, giving them ambitions beyond marriage - which becomes a step towards a larger goal rather than an end in itself. That's something that feels all to rare even now, but here it's an entirely different sidelight on history that poses all sorts of questions about our general perceptions of what a woman's expectations and experience were.

That's something that starts with suddenly seeing that there were successful female playwrights - plural - coming from middle class backgrounds, and goes on from there. I really hope more of their plays are revived (at least I do if they stand up as well as this one) putting these women back into the picture, widening and enriching our understanding of their society. I'd certainly like to read more of them to see what else I can learn even if I can't see their work.

In the end we enjoyed this so much we're considering going back to see it again towards the end of its run - which is really the highest praise I have.
Desperate Reader at 10:01 PM
Share