Most of this year has been spent in a bit of a reading slump. I've been more than usually indecisive about what I might be in the mood for, struggled to find the enthusiasm, or concentration, that all sorts of great looking books would call for, and found myself overwhelmed by the sheer number of unread volumes piling up around me. This week I made a decision - pick short books (anything around 150 pages, or less) and just get on with it.

This isn't my normal approach, but I'm finding it very helpful. There's a steadily growing pile of books that I've finally read which is really satisfying, that sense of being overwhelmed is diminishing, and the slightly unlikely combination of titles is holding my attention and shaking up my imagination (I feel like I'm getting a bit of a mental spring clean). 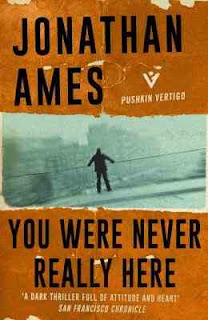 I'm particularly pleased that I've picked up some of the Pushkin Vertigo series that I have (the feeling now is that I have to collect them all). I don't know anything about Jonathan Ames beyond the little bit in the back cover of 'You Were Never Really Here' (proper research later, but for now I know he's American, and contemporary). To quote from the back blurb:

"Joe has witnessed things that cannot be erased. A former FBI agent and Marinr, his abusive childhood has left him damaged beyond repair. So he hides away, earning a living rescuing girls who have been kidnapped into the sex trade...

Brutal and redemptive in equal measure, You Were Never Really Here is a toxic shock of a thriller, laced with corruption, revenge, and the darkest of inner demons."

Given that Joe's favourite weapon is a hammer, and quite a lot of people end up dead or injured, Ames stripped back style isn't overly graphic. The brevity of his descriptions is still powerful, but we're mercifully spared details - though I'd generally argue that less is more with this kind of thing, so for me the lack of detail was a bonus all round.

There's a quote on the back cover from Gary Shteyngart (I looked him up) which says "Amazing... Would make Raymond Chandler happy", I can't think of a better way to sum up this book, or to recommend it. As I've now spent longer trying to think of a way to do just that then I did reading the book it seems sensible to stop, but I do recommend it.
Desperate Reader at 10:01 PM
Share