Translated from the Italian by M. S. Spurr.

One of the things I love about blogging is the way that it brings me books I would otherwise be unlikely to encounter, and which I fall deeply in love with. The flip side of that is sometimes having to read books by a certain time that I find hard enough work to long to put aside. Fortunately the latter rarely happens, and unless the book is terrible or I really hate (in which case I will give up on it)   the discipline of getting through something like that is probably good for me. 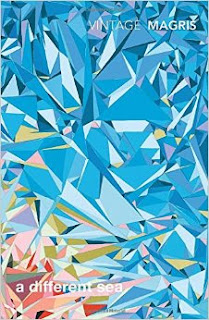 'A Different Sea' was just such a book, it's only novella length but it took me a week to read, I just couldn't get to grips with it, but I'd promised so I carried on. It was nothing to do with the quality of the writing, everything to do with my mood at the time - and maybe just a little bit to do with the lack of context provided.

This is a book that really needs an introduction, or even an afterword, unfortunately it doesn't have either. A dig around on the Internet has revealed that the protagonist, Enrico Mreule, was a real person, as was Carlo Michelstaedter, the friend and philosopher he idolises, and knowing this helps.

'A Different Sea' gives only the bare bones of a story, it opens with Enrico leaving the city of Gorizia and his circle of friends for Patagonia, partly to avoid national service. It's 1910 and he spends the next 13 years herding cattle in the pampas, effectively a recluse, until he returns home. Meanwhile his great friend Carlo has written his thesis and then committed suicide, and Enrico has missed the war.

He drifts back to Italy, and then onto the Istrian coast where he lives out a life of wilful disengagement with the world around him, despite the political and border upheavals caused by the Second World War, fall of the iron curtain, and Cold War respectively.

Is it a failed life where the academic and intellectual promise shown by the young Enrico have been utterly squandered, or a life of self sufficient contentment well lived? Has Enrico followed Carlo's philosophy through to its logical conclusion, or has he been too afraid, or lazy, to get on with the normal business of living? Is he even searching for an unattainable authentic life as the back blurb suggests, and in the process deliberately destroying his chance of that normal existence? And does any of that matter?

Magris certainly isn't saying anything either way, it's very much for the reader to decide what they think of Enrico, of Carlo, of their friends, and of Magris' intentions. He's slyly funny at times, and the book is beautifully written - cool in tone, spare on details, and yet still with enough human compassion for the difficult man that is Enrico to keep the reader engaged.

Looking back I'm wondering why I cared about Enrico, and yet I did, and do, to the point that I'm unwilling to think of him as a failure (despite his many failings). It's a surprisingly powerful book that probably needs to be read a number of times, or at least with single minded concentration (not least because everybody seems to have several names, and many of those names are very similar, and it's very easy to lose track) that I don't altogether feel I gave it.