I've got a copy of Gill Meller's 'Gather' and I'm really very excited by it, I'll write more about it in the next few days, but I'm going to start with his chocolate and rye brownies because I've just made some  and they're great, which is quite a big thing for someone who's been loyal to the same Nigella recipe for the last 16 years. 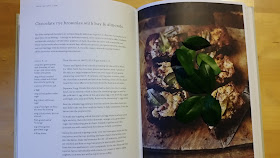 I've not been baking much of late so I've got cupboards full of things quietly passing their best before dates, which is annoying and wasteful, the brownie recipe was to good a chance to miss of using up a packet of rye flour (I keep buying it with the intention of getting a rye sourdough starter going, never quite get round to it, and then throw half the packet away because it so often seems to worthy to be tempting) and some nuts which are far to expensive to be allowed past their best before.

The promise was that rye and chocolate are a match made in heaven, with the nutty notes in the flour really bringing something to the mix. The end result is indeed satisfyingly nutty, not worthy at all, and this is a base I'm now really looking forward to playing with.

The actual recipe is for chocolate rye brownies with bay and almonds. I had myrtle (which really loves growing on a windowsill, has the most fantastic orangey scent to it, and is, for me, quite an acceptable bay substitute) and hazelnuts, which I should have toasted first. It also asks you to reserve half an egg white which goes into making a crunchy, sugary, topping which I thought might be slightly more trouble than it turned out to be.

So. Prepare a baking tin (about 20 x 30cm), and melt 200g of good quality dark chocolate with 180g of unsalted butter and a pinch of salt (it should probably be done in a bowl over water). Separate 1 egg and put half of the white to one side. The rest of the egg plus 3 more can go in a bowl with 100g of golden caster sugar, and 80g of soft brown sugar and beaten until light and fluffy. Turn the oven to 160 degrees C/ gas 3, and beat the half egg white until it's light and airy, add a pinch of salt, 100g of nuts, the finely grated zest of half an orange, and 50g of Demerara sugar. Mix until the nuts are well coated and the mix is properly combined, put to one side for a moment. Now beat the eggs and sugar into the slightly cooled chocolate mix, add 150g of rye flour, mix thoroughly, then pour into the tin. Take the egg and nuts mix and spread evenly on top, and dot 6-8 myrtle/bay leaves into the batter (push the base of each leaf into the mix). Bake for 25-30 mins, until cracked and firm on top. Allow to cool properly before eating.

I love the crunchy topping - the orange flavours from both rind and myrtle are lovely, and the change in texture from crispy to gooey is great, but I'm also keen to try these topped with marmalade and have a feeling that when I do I'll have found my personal brownie nirvana. 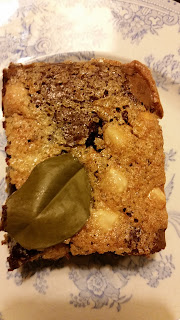