Trouble on the Thames - Victor Bridges

This is another offering from the British Library, but from the classic thriller range this time rather than a crime classic. The first thing to say about it is that it reads exactly like a Second World War propaganda film (not surprising) with the jingoism that implies. If references to the beastly Hun or cowardly dago's are all to much, well to be honest if they are all to much this probably isn't the sort of book you would seek out anyway but it's as well to mention it at the outset.

I do enjoy those films when I find one on TV (sadly rare these days, and a fondness for them is probably an indicator of my age) and the reason this book reads exactly like One is that they're fulfilling exactly the same purpose. 'Trouble on the Thames' was published in 1945 but is set in 1938. Dashing young Owen Bradwell (handsome navel officer) feels his world is coming to an end - on his way home from the South China seas he's suddenly become colour blind. Being able to tell the difference between red and green is quite important at sea so it's not looking very good, but with war in the offing a job in navel intelligence turns up. 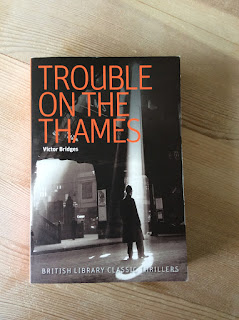 It's Owen's job to investigate a spy ring and keep the dastardly natzi's at bay, in the process he meets an attractive red head and gets embroiled in the murder of a blackmailer. Will the spy's get their comeuppance, will Owen make it out alive, will he get the girl, and will everyone show suitable British grit, stiff upper lips, and a proper sense of patriotism (apart from foreigners of course)? It isn't really a spoiler to confirm that the answer to all those questions is basically yes, and that's just how it should be.

I can imagine reading this in 1945 with a healthy dose of cynicism, but also finding it comforting. There are the pre war references to plentiful food and good wine, nice young people made of the right stuff, and things worth fighting for. The plot moves swiftly along, it has a couple of unexpected twists, and moments of proper tension along with dialogue which makes me smile - though that's perhaps as much for the period perfection of it, as it is intended humour.

Reading it now there is some of the same cynicism, and still plenty of comfort. This is a world of the same black and white certainties as in those black and white films that take me back to rainy weekend afternoons as a child (it's amazing what you find yourself watching when there are only 4 channels to choose from). As an exercise in propaganda and moral boosting its worth examining, but mostly I'm recommending 'Trouble on the Thames' simply because it's easy going and enjoyable.

I've loved the crime classics series (it goes from strength to strength) and given how much fun 'Trouble on the Thames' was I'm really looking forward to seeing more classic thrillers.
Desperate Reader at 2:14 PM
Share