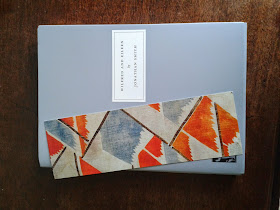 'Wilfred and Eileen' is the kind of book I'm quiteSummer in February' - Jonathan Smith wrote both the book and the screenplay so although I haven't read it I'm assuming the film is close enough to the book. I went as part of a family outing mostly because there was dinner on offer before hand which probably demonstrates the level of enthusiasm I felt beforehand. Not Smith's fault, but faced with the cinematic choice of a woman with clear mental health issues making a series of terrible relationship decisions or something with explosions in it I normally choose explosions. This policy has lead me to sit through some terrible films.

wary of so bear with me through this post, I will be trying to keep my prejudices in check but they're more than likely to get away from me. First up I didn't much enjoy the film version of '

'Wilfred and Eileen' is based on the lives of Wilfred Willet and Eileen Stenhouse, they were the grandparents of Anthony Seldon who Smith taught at Tonbridge school and who gave him the bare outlines of the story one day after class. This is the second reason I'm wary - I'm not on the whole a fan of biography's, and though theoretically the admission that some of this is fiction the pedant in me wants to know exactly how much. The bare biographical bones are as follows, Wilfred and Eileen meet in Cambridge, it's 1913, Wilfred has just finished his degree and it's the last round of formal events before packing up and returning home ostensibly as an adult. Wilfred is destined for medicine and has a summer course at the London hospital, Eileen it turns out is a nearish neighbour and chance acquaintance deepens to friendship and then love. The two marry secretly, sneaking off to a hotel for snatched hours alone, Wilfred is immersed in his studies and doing well at them, and then all of a sudden war is on the horizon. He feels it's his duty to sign up and despite Eileen's dismay does so. On the 13th December 1914 he's shot in the head whilst trying to help a wounded comrade. Miraculously he survives and is eventually rescued from almost certain death in a Boulogne hospital by Eileen who has managed to get a passport and passage over. She brings him back to London, makes sure he gets the best possible chance, and eventually will dedicate her whole life to this man - she really must have been a remarkable woman.

My third reservation/prejudice is that this book was initially published in the 1970's. Smith had the help and approval of Willets daughter and his research is clearly impeccable but my preference is for books contemporary with their setting - which may be why I'm not much of a fan of biography. All these prejudices aside this is a fascinating book, especially given that it's based on true events. Smith is clearly with Wilfred Owen on the whole "My friend, you would not tell with such high zest
/ To children ardent for some desperate glory / The old Lie: Dulce et decorum est
/ Pro patria mori.". Our Wilfred sets off to war with all the idealism a young man of his class and education would be expected to feel and gets a very rude awakening. His medical career is finished and there must have been real questions over what he would have been able to do with the rest of his life. For Eileen married to a man she's known for less than 2 years there's the possibility of being tied to a stranger for the rest of her life who will be utterly dependant on her. This isn't quite how it turns out but I get the impression that Wilfred wasn't an easy man.

The afterword gives a little bit more information, the couple had 3 children, Wilfred joined the Communist party and did a lot of work for trade unions as well as writing a series of books about birds and flowers. Eileen remained devoted to him and presumably they had a happy marriage but what Smith didn't find out for some time was that their first child, a son, seems to have become totally estranged from his parents and there is talk of moods.

It's hard to know what sort of man Wilfred would have been without the head injury, he seems to have been a dedicated and brilliant student, though only a year into his medical studies who can know what sort of surgeon he would have made, and then the secret marriage is odd. Smith suggests a tricky relationship with Wilfred's parents, it seems he couldn't talk to them about getting married at all - the couple were young so their initial dismissal is understandable, but Wilfred is also unwilling to reassure Eileen's parents about his intentions which rather reinforces why his parents should be so hostile to the idea. I also find it odd that after getting married they don't tell their parents, socially Eileen is a step up for Wilfred - it's a romantic story but I don't understand the secrecy.

What I find really interesting though is the sense of social change behind this story. The war may have been full of donkey's leading lions but without it one wonders what would have happened. Assuming Eileen wouldn't have got pregnant and caused the sort of furore that would have caused Wilfred's parents to cut him off without a penny it seems likely he would have turned first into the sort of doctor that he rather despised as a student, and then into much the same man his father was. Nothing can have shown him quite as much equality as life in the trenches. And as for Eileen, she wasn't bought up to be the sort of girl who could have taken on the war office and managed to get herself across the channel before circumstances turned her into that woman. Wilfred went on to lead a useful life, the personal loss was terrific but not all the changes were bad.