THE INN AT THE EDGE OF THE WORLD 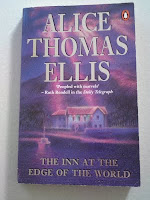 Alice Thomas Ellis is never a simple writer, I’m pleased to have got most of her books now but sometimes feel they need to be approached with caution, especially after reading one. I chose ‘The Inn at the Edge of the World’ last week because it was billed as a sort of ghost story which seemed appropriate for Halloween, and because it’s a set on a remote Scottish Island – something I’m always intrigued by.
I’ve said it before, and will probably say it again but Alice Thomas Ellis ought to be properly in print and sadly at the moment she just isn’t. I always find her writing unsettling and this book was no exception. It’s a simple enough story; an unhappily married man has taken himself and his wife off to a remote island to run an Inn in the vain hope that the isolated setting will curb her excesses. Predictably his plans have foundered somewhat and he’s left with a failing business in a community that won’t accept him with a very angry wife for company. For Christmas he manages to gather five more equally unhappy, disillusioned and empty souls all with their own reasons for escaping the festive season.

What follows is a cleverly understated descent into a calamity which shattering as it is, somehow avoids being the tragedy I thought it would be; in the most unlikely way it almost seems like a happy ending. The Island is presented as particularly inhospitable; the locals are referred to but refuse to engage with visitors and incomers (or readers), it seems an unreal place mostly obscured by mists, rains, or snows – a grey landscape melting into a grey ocean. Anyone familiar with the north coast in winter will recognise this particularly bleak take on it, anyone who has been a stranger to a place will be familiar with the impression of life and activity happening just out of sight and behind doors closed to the interloper. 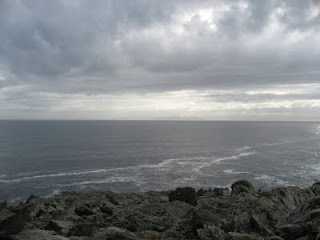 The supernatural element of the tale is partly ghostly, partly based on the myth of the Selkies – the seal people. Legend has it that the seal folk would come ashore on moonlight nights shed their skins and dance. Mortals who fell in love with a Selkie could keep them on shore by stealing their skins, but should a seal woman or man ever find that skin again they would be off back to the sea regardless of family left on land. ‘The Inn at the Edge of the World’ is something of a reworking of this myth – this is when the the Selkies reclaim their own; where sea meets land and all the edges are blurred. Those who are recalled to the ocean seem somewhat more – or less than human.

Anyone else would have thought this was enough to be going on with but not Alice Thomas Ellis. She also throws in a good chunk about Gordon of Khartoum which allows her to muse on the meaning of Christianity, and a running criticism of ‘The Tennant of Wildfell Hall’ which I would guess is a book she didn’t think much of. As the opinions expressed about Helen Huntingdon very much coincide with my own youthful reading of ‘The Tennant of Wildfell Hall’ I found this sort of running joke added the necessary comedy element to balance the book out. 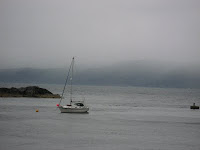 Altogether a book I want to recommend – finely wrought, well balanced and provocative. Please give Alice Thomas Ellis a go if you haven’t yet tried her, she’s more than worth the effort.